Mr. Crewdson creates amazing work. 'Haunting, even. I show a video to my students every year in which he narrates and walks the viewer through the process of creation.

From an NPR article about Gregory Crewdson:


Gregory Crewdson doesn't so much take pictures as makethem. Some critics say the photographer and artist is reinventing the genre by using film techniques to stage pictures.
Crewdson's carefully constructed tableaus generate more questions than answers:
• A man sits in a garage, the door gaping open to a dark and rainy sky. A car is parked haphazardly in the rain, its headlights focused on the man. He is surrounded by lawn turf, rolls and mounds of it. Half-buried in the turf is a rake. His face is weary, a little sad, maybe even disconsolate.
• A woman sits in the passenger seat of a car stopped in the middle of a deserted intersection. The driver's door is open. Mist, and the half-light of the sky, suggest that it's early in the morning. Above the car, the traffic light is yellow.
It's the moment between then and now that interests Crewdson — he likes that photography limits him to choose only one moment to convey a narrative arc. Each photo is polished and technically perfect, but still somewhat undone. The viewer must imagine what comes before and after.
Crewsdon says his pictures must first be beautiful, but that beauty is not enough. He strives to convey an underlying edge of anxiety, of isolation, of fear.
The 40-year old photographer works on sound stages, with set designers and lighting artists culled from the ranks of independent film crews. His outdoor photos are staged in ordinary-looking places, often rural Massachusetts towns like Pittsfield and Lee. He's been working in these small New England towns for 20 years.
The images, he says, come to him while swimming. He teaches at Yale University, and has a studio in New York; in the city, he swims in a pool. But Crewdson says he prefers to swim outside, in lakes and rivers. The world beyond the shore, he says, offers very little time for imagination, to get lost in unconscious thoughts — he finds that time in the water. 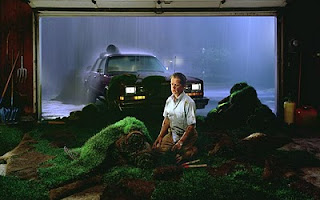 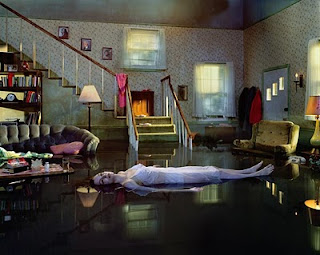 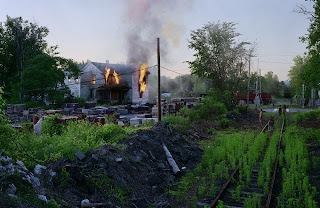