I have been investigating Holloway ... I admit that I like "twiggy" art, and wires and negative space, and totem poles. 'Pretty deep of me to base my admiration of an artist on my elementary tastes, huh? I don't care because what appeals appeals, and this work appeals to me :)

Evan Holloway makes playful use of materials to arrive at sculpture in which formal and political interests intertwine and establish a balance between a critique of modernist conventions and a carefully calibrated satirical social commentary. Evan Holloway's sculptures combine the abstract and linear with the figurative. Inspired by music and colour theory, economics and mathematics, Evan Holloway creates distinctive, often elegant and sometimes strange forms that constantly make reference to the history of 20th century sculpture. His sculptures are often suspended from the ceiling, hovering like large mobiles above the gallery floor and, as in Untitled 2003, incorporate an assemblage of elongated faces modeled in hobby plaster and intricately painted in a variety of doleful expressions, a characteristic of his work. These figurative elements are attached to the formal, abstract, structures that make up the other portion of the sculpture. In Capital 2005, nude male figures replace the faces in Untitled 2003 as the figurative elements placed in juxtaposition with the linear structure. Compared to the faces, the figures featured in Capital are less individualized; they are submissively and comically posed on their backs and fronts and attached to each other by a network of bent metal rods. Each of the little figures is connected to the rods at its mouth and anus, and their gridded home is roughly coated with brown paint resembling fecal matter. Evan Holloway’s sculpture poses formal questions about scale, colour, line, shape and symmetry while at the same time making references to popular culture, historical narratives and social ideologies. 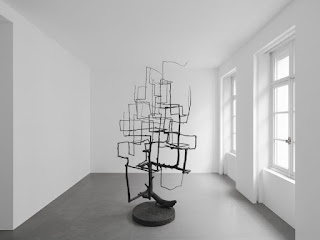 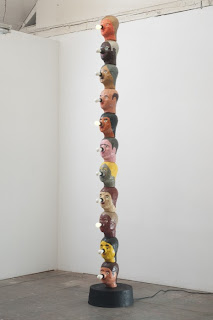 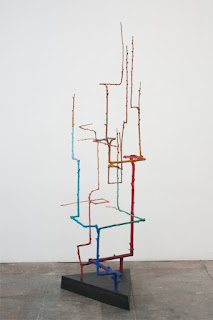 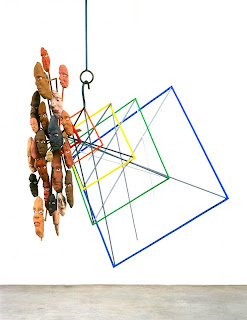