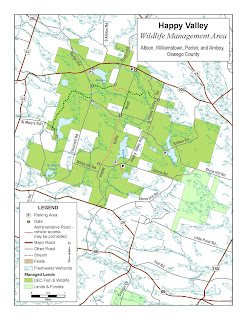 Trilliums carpeted the woods behind my childhood home, and covered the surrounding forests known as Happy Valley. We were told that they were illegal to pick, and apparently that's true. According to The New York State Conservationist (a magazine that my dad always subscribed to):
The red trillium is listed on New York State's Protected Native Plant List. It cannot be "picked, plucked, severed, removed, damaged, or carried away" without consent of the landowner. A more natural protection from picking is the nodding habit of the flowers, which tends to keep them hidden.

An interesting fact I just learned from Wikipedia:
Trillium is one of many plants whose seeds are spread by ants. At maturity, the base and core of the trillium ovary turns soft and spongy. Trillium seeds have a fleshy organ called an elaiosome that attracts ants. The ants extract the seeds from the decaying ovary and take them to their nest, where they eat the elaiosomes and put the seeds in their garbage, where they germinate in a rich growing medium.

I am hoping that our new property will have trilliums growing, and if it doesn't I am going to have to plant some. Apparently you can purchase them for planting, and they aren't too difficult to grow.