I happened to stumble upon an interview on NPR with Neil Gaiman, and he blew me away. Apparently he gave a commencement speech last year at Philadelphia's University of the Arts, and his speech has gone viral. According to the NPR blurb:

A year ago, author Neil Gaiman told the graduating class at Philadelphia's University of the Arts that life is sometimes hard. Things go wrong, in life and love, and in business and in friendship and in health and in all the other ways that life can go wrong. And when things get tough, Gaiman said, this is what you should do: Make good art.

Gaiman said he never expected to give advice to people graduating from an establishment of higher education, since he never attended college himself.

Gaiman has written a number of novels, children's books, comic book series and screenplays — and has a new book based on the commencement address, titled Make Good Art.

I intend to have my high school students listen to the speech on our last day of classes because I think it applies not only to those who will "make art" in their lives but really to anyone. 'Love everything he has to say!

Incidentally, my dear friend's son earned his degree from the University of the Arts, so I have had the opportunity to tour some of the studios as well as to witness the great success her son has found since graduating. It is a school I would strongly recommend to anyone looking for an arts-related career. 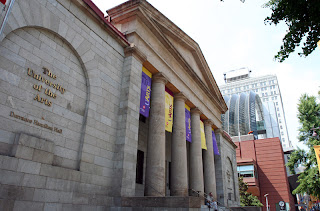