The Cedar Waxwing is my favorite bird. I'm not sure why -- they do not have a fabulous song (just a weet weet kinda sound) and they are not a flashy color. Then there is that snazzy little mask and their understated yet beautiful coloring. Sometimes I look up and there they are in my tree, without any big production. Maybe it is because they are a little mysterious that they appeal to me.

I came across the following excerpt from the electronic book Life Histories of Familiar North American Birds, and it is a pretty fancy way of saying the same thing I just wrote:

When we become well acquainted with the waxwing we look upon him as the perfect gentleman of the bird world. There is in him a refinement of deportment and dress; his voice is gentle and subdued; he is quiet and dignified in manner, sociable, never quarrelsome, and into one of his habits, that of sharing food with his companions, we may read, without too much stress of imagination, the quality of politeness, almost unselfishness, very rare, almost unheard of, in the animal kingdom. His plumage is delicate in coloring--soft, quiet browns, grays, and pale yellow--set off, like a carnation in our buttonhole, by a touch of red on the wing.

Cool Facts
The name "waxwing" comes from the waxy red secretions found on the tips of the secondaries of some birds. The exact function of these tips is not known, but they may help attract mates.

Cedar Waxwings with orange instead of yellow tail tips began appearing in the northeastern U.S. and southeastern Canada in the 1960s. The orange color is the result of a red pigment picked up from the berries of an introduced species of honeysuckle. If a waxwing eats enough of the berries while it is growing a tail feather, the tip of the feather will be orange.

The Cedar Waxwing is one of the few North American birds that specializes in eating fruit. It can survive on fruit alone for several months. Brown-headed Cowbirds that are raised in Cedar Waxwing nests typically don’t survive, in part because the cowbird chicks can’t develop on such a high-fruit diet.

Many birds that eat a lot of fruit separate out the seeds and regurgitate them, but the Cedar Waxwing lets them pass right through. Scientists have used this trait to estimate how fast waxwings can digest fruits.

Because they eat so much fruit, Cedar Waxwings occasionally become intoxicated or even die when they run across overripe berries that have started to ferment and produce alcohol.


Building a nest takes a female Cedar Waxwing 5 to 6 days and may require more than 2,500 individual trips to the nest. They occasionally save time by taking nest materials from other birds’ nests, including nests of Eastern Kingbirds, Yellow-throated Vireos, orioles, robins, and Yellow Warblers. 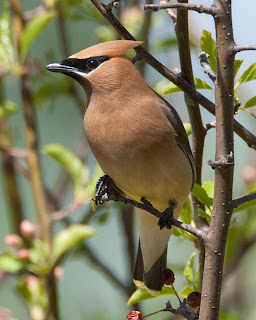 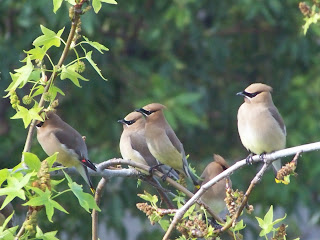 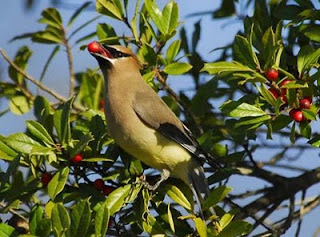